There will not only be amazing bands for our evening parties but we will also have a great and during our Saturday daytime activities. Chris Tanner & The Copenhagen All Stars.

They will play both for the Saturday boat ride and the street parade. 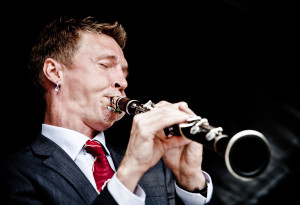 Chris Tanner grew up in Melbourne Australia and started playing clarinet when he was 15 years old. He got a lot of influences from the Melbourne music scene and began to play professionally shortly after. Chris played with Allan Browne’s New Orleans Rascals and the Yarra Yarra Jazz Band.  In 1995 he joined the Melbourne band The Hoodangers and toured extensively. There first tour took them to Russia and Western Europe. Where they traveled to Denmark to the Femø Jazz festival and met a fan who repeatedly bought them back to Denmark.  Chris also traveled to Denmark to play with other Australian bands like Julie O’Hara. He now lives in Copenhagen and plays music on the jazz scene there.