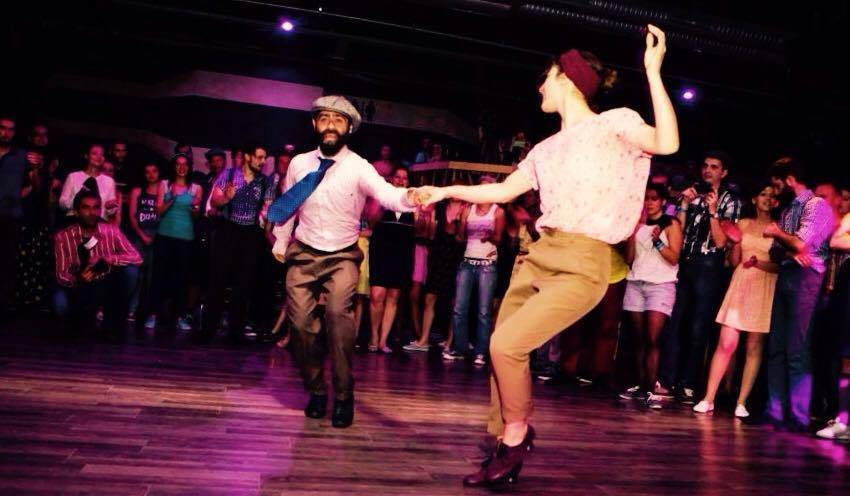 Hakan started his unforeseen dance career with Turkish folk dances to hang around with his friends in high school years. His interest in dancing continued with tango and salsa while he was studying in the university. However, he truly fell in love with Lindy Hop in the year 2006 through a video clip on youtube while he was sitting in an engineering office at a distant island called Iceland. His passion for Lindy Hop grew so big that he had to fly at least 3,5 hours for the next Lindy hop destination for many many years. He also had the chance to practice extensively under the guidance of Dax Hock and later of Sakarias Larsson. With his desire to share the joy of this dance with everyone around him, he first brought Lindy hop to Iceland and then to his home country Turkey. He probably owns a world-record in this category. His dancing style is light and energetic with a good sense of rhytm and he works constantly for new rhythmical ideas. Currently he lives, teaches and performs in Istanbul where he founded the first Turkish lindy hop community, as well as organizing Orient Lindy Express, Istanbul Lindy Exchange I this city and Arctic Lindy Exchange in Iceland. He’s never ceased to travel abroad to meet his fellow Lindy hoppers around the world since day one.

Nazli started dancing Lindy hop in 2010 after many years of professional sports career. She fell in love with this dance form at first sight and brngs her sports background into dancing which gives her a dynamic and athletic look. She teaches and performs regularly in Istanbul and in international workshops. She’s also a swing DJ both locally and internationally. She travels as much as she can to share the spirit on the dance floor.